I remember when I reverted into Catholicism in 2013, I was keen to point out so many of the moral problems that were going on in the Church, whether on a parish level or something higher than that. And the Apologists of the world at the time would respond to me saying something to this effect: “Oh, pffft. That’s Donatism, bro! Your grinding your gears by returning us to the 3rd and 4th centuries when the Catholic Church has already solved that problem! Its no worries, man!”

END_OF_DOCUMENT_TOKEN_TO_BE_REPLACED

Professor of Theology at the University of Notre Dame, Dr. Gary A. Anderson, has written a wonderful and timely article over at Church Life Journal entitled “The Roman Church as Casta Meretrix“. Taking from Hans Urs Von Balthasar’s essay “Casta Meretrix”, which means Chaste Whore, Dr. Anderson points out that the infestation of sin and wickedness in the Church far precedes not only Martin Luther during the 15th-century, but also the early Patristic era of the Church so far back as the Holy Scriptures in its Old Testament history. One need only to study the characters of those who are included in the physical Patriarchate of the Lord Jesus Christ, such as the the Kings of Israel beginning with David unto the Babylonian Captivity. Dr. Anderson carefully shows that God’s plan for redemptive history often involves using the instrumentality of wicked men, a clear sign that God is not acting to save the world according to her merits. In fact, it is rather the divine oaths given to Abraham, Isaac, Jacob, and David that sustains Israel as the bearer of divine revelation and the true oracles of God Most High.  One citation used in the article comes from New Testament scholar Dr. Raymond Brown, who makes the following observation when studying the wicked Kings which lie in the geneology of the Lord Jesus:
END_OF_DOCUMENT_TOKEN_TO_BE_REPLACED 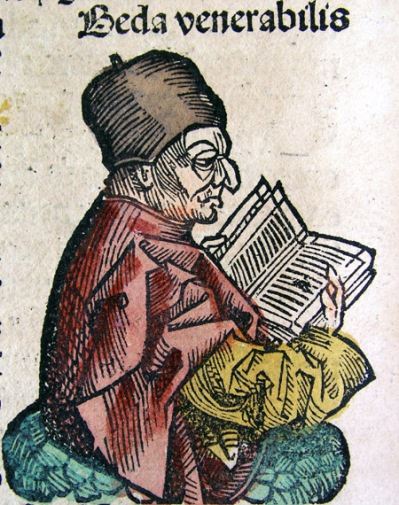 St. Bede the Venerable (672-735), who is declared Doctor of the Church by Pope Leo III (1899), and venerated in a Feast for the Catholic Church on May 25 and for the Eastern Orthodox on May 27, speaks to the universal primacy of the Pope of Rome. Notice in the first citation, Bede recognizes the invisible principle of unity, the Holy Spirit, but then admits its co-operation with the visible principle of unity, i.e. the Pope. In the second citation, Bede records the decease of Pope St. Gregory the Great, and notes that he held “pontifcial power” over all the churches of the world, not least England or the West.

“Following the example of the blessed ever-Virgin Mary, who was married and at the same time unstained, the Church conceives us as a Virgin by the working of the Holy Spirit; she gives birth to us as a Virgin without birth pangs; and as a woman married to one person but impregnated by another, throughout her individual parts that make her one and catholic, she remain visibly united to the legitimate [Roman] Pontiff set over her, but she increases in number by the invisible power of the Holy Spirit” (In Lucam; PL 92, 330B)

“At this time, that is, in the year of our Lord the blessed Pope Gregory, after having most gloriously governed the Roman Apostolic see thirteen years, six months, and ten days, died, and was translated to an eternal abode in the kingdom of Heaven. Of whom, seeing that by his zeal he converted our nation, the English, from the power of Satan to the faith of Christ, it behooves us to discourse more at large in our Ecclesiastical History, for we may rightly, nay, we must, call him our apostle; because, as soon as he began to wield the pontifical power over all the world, and was placed over the Churches long before converted [which were] to the true faith, he made our nation, till then enslaved to idols, the Church of Christ, so that concerning him we may use those words of the Apostle; “if he be not an apostle to others, yet doubtless he is to us; for the seal of his apostleship are we in the Lord.” (Ecclesiastical History, Book II, Ch. 1)

Cardinal Wuerl and Cardinal Schonborn as they leave the opening session of the Synod of Bishops on the family at the Vatican Oct. 5, 2015 (CNS/Paul Haring)

Dr. Eduardo Echeverria, Professor of Philosophy and Systematic Theology at Sacred Heart Major Seminary, in his recent article entitled “History, unchanging Truth, and Vatican II” at the Catholic World Report, takes on a difficult task  in attempting to relate together the absolute truth of Christian revelation and its transmission through the medium of changeable and historically-conditioned human expressions (i.e. doctrinal formulations within a certain social and historical context). Dr. Ed puts his finger on the right target by situating the veracity of the 2nd Vatican Council, at least partly, on whether we can maintain the enduring validity of the doctrinal content of the Church’s past doctrinal formulations while at the same time acknowledging the changeability in their contextualized framing.