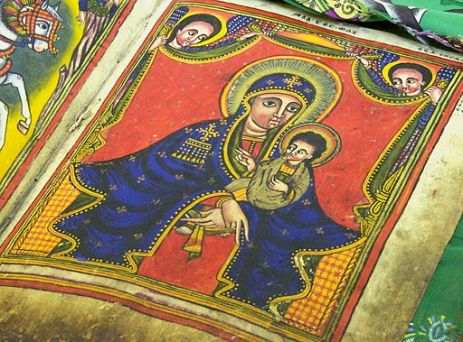 Following the history of the Council of Constantinople III in A.D. 553, the oikumenical Church was faced with the difficulties of Emperor Justinian’s condemnation of the Three Chapters. Many Western churches had refused to accepted the decrees of the 5th Ecumenical Council, and it was the promptings of the Pope’s in the 6th century which made some effective headway for restoring communion. The Papacy took some what of a hit since the Pontificate of Vigilius & Pelagius in the eyes of many in the West, and, in particular, the African episcopate, because they understood the Papacy to have capitulated to the Byzantine Caesaropapism. For them, the divine constitution of the Church was Apostolic succession, with the primal head being St. Peter’s successors in Rome. However, since, for them, Rome had succumbed under the thumb of the Emperors, it was time for them to rely on the Papal teaching pre-Byzantine captivity (i.e. Chalcedon & Pope Leo’s Tome). And so when we enter the 7th century, one wonders if any Western churches thought that Rome’s institutional primacy was defunct. We get an answer to this question with the Western response to the heresy growing in the East which said Christ, because He is a single Person, only has a single will. British Professor of Late Antique and Byzantine Studies and offspring from Cambridge, Dr. Judith Herrin, describes the response of the African churches in the below citation, and I think it aptly describes the role of the Roman primacy. Often times the rigorous theological work had been done outside the Roman See, such as St. Maximos’ florigelium against Pyrros, the Studite monks on Icons, St. Cyril of Alexandria against Nestorius,  St. Athanasius against Arius, and St. Augustine against Pelagius. And yet, while the champions of orthodoxy are winning well in their respective regions, they all knew that the Roman See was where official condemnations were to be passed. It would be like today, where witnesses, video footage, the suspect, and victim all can provide the perfect knowledge as to the cause of the crime, and yet it remains to be examined and judged by the judicial system of a particular state. That best describes the divine institutionalization of Christ in Peter’s primacy (i.e. Rome’s primacy). It doesn’t entail the heights of theological expertise, but only a vehicle through which Christ judges whether something is passable or not. Herrin writes:

“While many issues continued to divide Christians in different parts of the oikoumene during the seventh century, it was the Monothelete theory of Christ’s will that brought theological disagreement to a head in the 640s. Once again Rome confronted successive Patriarchs of Constantinople, accusing them of introducing novelties – and wrong ones –

into the established faith. Once again, the dioceses of Africa championed this defence of orthodoxy, under the influence and leadership of eastern monastic opponents of the ‘one will, one energy’ doctrine. When these Monothelete errors had been exposed by Maximos’s defeat of Pyrros in the public debate of 645, the Africans turned to Rome, asking Pope Theodore to excommunicate the heretics. They begged him to anathamatise Monotheletism as incorrect theology; they asked for their own criticisms to be forwarded to Constantinople by papal legates – in short, they recognised the institutional position of the apostolic throne [Rome] as the channel through which a condemnation of the East should be made…In their appeal to Rome, they highlighted the see of St. Peter as the sole Christian centre with the historical weight and authority to pronounce on theological definitions of dubious orthodoxy…They appealed to the pope as the inheritor of St. Peter, the rock on which Christ had laid his foundation, stating their conviction that it was his duty to oppose the heretics of Constantinople and return them to orthodoxy.” (The Formation of Christendom, Pg 250-51)